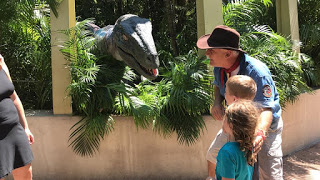 If you have children with a larger age gap, Universal Studios is great because there’s something for everyone. Regardless of Age if you or someone in your family loves Harry Potter than Harry Potter World is a must.

Our Recent Trip to Universal Studios Orlando with Kids

Deciding on a hotel for your trip to Universal Studios Orlando with Young Kids can be a challenge because there are many options. It can be hard to decide where to stay near Universal Studios Orlando. There’s a range for every budget. There are several nice perks of staying onsite. You can pool hop when staying at universal resorts, so you can use the pools at any of their hotels. That means even if you’re staying at the Royal Pacific you can enjoy the lazy river and slides at cabana bay.

Some hotels offer Express pass with your hotel stay. This is an awesome perk and often makes the hotel cheaper then Cabana Bay if you factor in the cost of express passes. If you walk from the resorts or take the boat you have a separate security line than the main entrance so there’s almost always no waiting.

We loved the Royal Pacific Hotel. For the cost of what would be a moderate resort at Disney you are close enough to walk (15 min) to the parks entering from a separate security point then the day trippers. We never waited. You also get Express passes for everyone staying for every day of your stay including check in and check out day. This is like unlimited “fast-passes” which means very little waiting.

While I love the pools at Cabana bay and the cafeteria is very convenient, I didn’t like the rooms.We could hear an action movie playing till 11 pm and the room only offers zest soap (I’m allergic) so I was glad I had read this in advance and grabbed some from royal pacific. I didn’t find the beds as comfortable and wished we had paid the extra for 2 more nights at royal pacific. Cabana bay really is too far to walk, and we found the bus to be inconvenient compared to the walk from Royal Pacific.

Hyatt Place is across the street from Universal Orlando and is an short walk to the Main entrance. Free nights start at 12,000 Hyatt Points per night and breakfast is included. There’s also an outdoor pool for when you need some downtime.

There are 2 Parks plus a water park at Universal Studios Orlando. There’s plenty to do in the parks and we can do what the kids want when they want and aren’t on a schedule. At the same time we can spend the day at the pool if we want and head to the park in the evenings or leave the park early and spend the afternoon/evening at the pool.

Jurassic Park is my favorite. It’s a must if you have a Dinosaur loving child. The Velociraptor experience is so much fun. It’s an animatronic dinosaur that they have turned into an experience. My kids still think they met a real live Dinosaur.Pterodactyl Flyers is a very fun ride that is only for those 36-56” tall and an accompanying adult if under 48”. If you go when the park opens for the day, you can usually ride it a few times before the line starts to build as this ride has no express pass.

While Jurassic Park River Adventure is a little scary for younger kids it’s fun and immersive. The Jurassic Park Discovery Center is so much fun for kids, looking for fossils, playing with the large dinosaurs and watching baby dinosaurs hatch. If you are lucky you will be selected to name, the hatch-ling. Camp Jurassic, a play area, is a lot of fun. There’s water guns and climbing areas with netting. My kids could and did spend several hours at this area.

Speaking of Play Areas there are so many different ones at Universal Studios. Curious George Goes to Town which is a Splash Area (kids will be soaked), Fievel’s Play land which includes a small water-slide (but u don’t get very wet), Barney’s Backyard which is great for toddlers but even my kids at ages 4-6 enjoyed it.

Me Ship, The Olive which is a Boat play structure, and If I ran the zoo.These play structures provide hours of entertainment for the kids and some reprieve from the heat. Camp Jurassic and If I ran the zoo in Seuss land are my children’s favorite. Having only 2 parks and 5-7 days meant I didn’t have to drag my children out after 20 min to move on to the next attraction though you may still need to drag them out after an hour or 2.

Suessland is another great area for younger kids. Most rides here require 36”. It’s a wonderfully themed land where you can meet Characters from Dr Seuss books, enjoy some rides and of course the play structure. The Character’s at Universal are another reason to go when your kids are younger. Younger kids’ imaginations can make certain experiences very magical.Favorite Character’s you can meet include Transformers, Minions, Trolls and Spiderman.

Many wonder what age is too young for Universal Studios Orlando. A lot of rides require a min of 36”, though 40” and 42” would allow some really fun rides I would say its best when they’ve hit 36” or taller. Our first trip our youngest was 40” and had a blast. Keep in mind Pterodactyl Flyers requires a 36-56” height to ride but 36”-48” requires an adult which means you get to ride along. These are the rides that would be missed if you go at 36” vs 40 or 42” (note this is not a full list of height min)

There weren’t a lot of exciting options and many restaurants were not opened or closed early with no accurate times posted on the app. I looked at menus before our first trip and new we could place an amazon prime order or pack some food to save money. We only spent $260 in 5 days on food including Refill cup and several days of refills, dinner at Toothsome (only $53 as we did 2 flat breads and shared a dessert), Hot dog Hall of Fame and Thunder Falls and cabana bay food court. We brought easy mac, shelf stable salami we buy at aldis and crackers along with snacks.

Out of all the meals in the park we had a rotisserie chicken meal with potatoes and vegetable and it was enough to share for a light meal for $15.The Korean Beef Taco from Bumble Bee Man’s was very good too. 2 tacos and chips $9.99 and you can mix and match tacos. At Universal City Walk, we loved toothsome our first visit, especially the duck flatbread, but our second visit it wasn’t the same. I still would recommend it for the experience. We also enjoyed Margaritaville our first visit but didn’t go back the second time. They have stilt walkers that will make balloon hats for the kids.

The pool bar at Royal pacific has shipwrecked nachos that are so big our entire family of 4 cannot finish them. it’s about $15-$20 depending if you get meat. It’s a great simple dinner while spending an evening at the pool. If eating at Hot dog Hall of Fame, note you can get a children’s meal (I forget what they call it) for $8.50 and includes 2 toppings of your choice and fries- it’s the same size meal as the $9.99+ adult versions. My husband was able to order (4) of these without an issue saving us $6 total.

Cabana Bay has a cafeteria at the resort that offers a wide variety of items for families who can’t agree on where to eat. There is also a microwave by the tables so if you bring food such as easy mac or if you have leftovers from a meal you want to reheat you can microwave it there. We had brought easy mac, salami and crackers with us as well as snacks for the kids.

This recent trip we also purchased an unlimited refill cup. You pay an initial purchase price and a daily activation fee.We used this mostly for some slushies as it was so hot while we were there. Overall it was worth having but if it wasn’t so hot we wouldn’t have gotten it.

Tips for Planning your day at Universal Studios Orlando Parks

Stay Onsite if Budget Affords even if for just 1 Night

Staying onsite allows you early access to one specific park each day. Usually Island of Adventure where all the Harry Potter Rides and attractions (except the train) are open for an hour before the park officially opens. You can practice your wand skills and ride the rides with little wait. This is an ideal time to go for Harry Potter attractions.

Head to Jurassic Park First when visiting Island of Adventure

For Island of Adventure I would recommend heading to Jurassic Park first when the park officially opens and riding Pterodactyl flyers before the crowds. Check the time for when the Raptor Encounter opens and line up 20 min before it opens. This is great to do on early park days just wait on the bridge that leads from Harry potter to Jurassic Park till they drop the rope. Island of Adventure is designed as a circle so it’s easiest to continue one way, heading from Harry Potter to Jurassic Park, Skull island, Toon Lagoon, Marvel Super Hero Island and come back around to Seuss landing and Lost continent.

Water Rides in Toon Lagoon Will Soak You

The water rides in Toon Lagoon will soak you so bring a change of clothes or at the very least wear quick drying clothes. Universal Studios Orlando, I recommend visiting Minions and Transformers and their associated meet and greets first. This was our kids favorite part and got them very excited for the day. The play structures at Universal Studios are all together it’s a prime area to go to after Minions and Transformers or wait till the afternoon if they want to cool off or let them burn off any lasting energy.

The nice thing about Universal is you don’t really have to have a plan especially with express passes you can do what you want when you want it. As a Family we like to do it all and stay busy and Universal provides this but at a pace you don’t feel rushed yet are never board. Check out how you can fly for free to Orlando and other popular destinations that Southwest Airline flights. If you are interested in visiting Universal Studios and Walt Disney World check out my article about visiting 2 Parties at Magic Kingdom and how it compares to a day ticket.