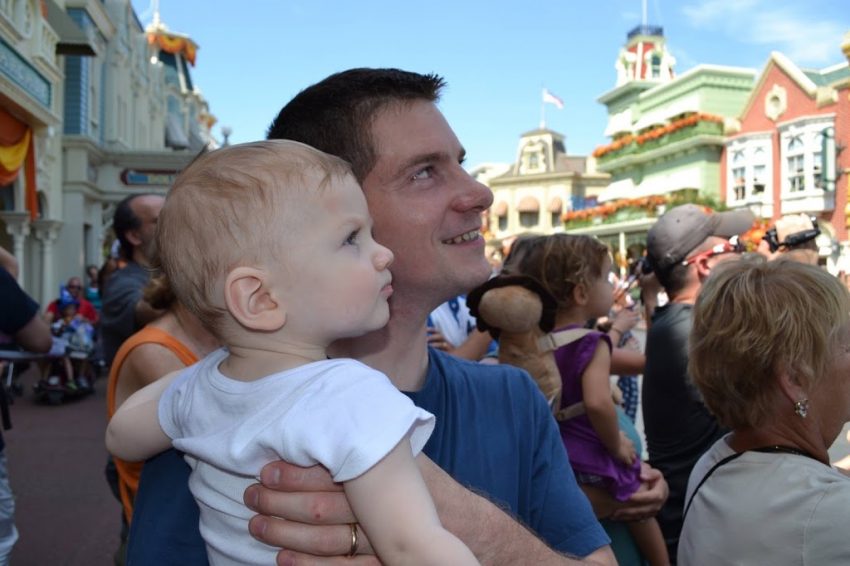 Why Families Continue to Return to Disney? These Magical Moments at Disney World will make you keep coming back. It all started when my husband had a conference in Orlando and we decided our son (9 months old) and I would tag along and spend some lazy days by the pool while my husband was at his conference. We flew on Sunday for registration and had the day free. So we decided to go to Magic Kingdom for the day after all our son was free.

Arriving at the parade after several rides, we were standing behind people and our son was on my husband’s shoulders, so he could see. As the parade went by our son’s eyes opened with amazement. The aww and amazement we saw on his face brought us both to tears. That was the moment, we were hooked.  Throughout the years we have sort of rotated between Walt Disney World and Disneyland California and took a trip to Disneyland Paris. In the end, the most magical experiences for us have been at Walt Disney World.

1. The First Moment we were hooked and knew we would Continue to Return to Disney

Our son Watching the Parade for the first time at 9 months old. Seeing it through his eyes really made the magic come to life for us.

Our son at 9m old crawling over to Mickey Mouse and holding on to him so he could stand up. He has always loved Mickey.

Having to hold our daughter back at 16m old as we waited in line to see Minnie mouse and she was freaking out trying to run to her. She had feared other non-Disney characters at the time and we weren’t sure how she would feel but her reaction made it clear.

Our daughter playing the role of Beast at Enchanted Tales with Belle Twice at age 3.5yrs old and 5.5yrs old. It must be her fierce roar and curly hair, but she plays the role well and the entire room goes aww when you hear her roar. There’s nothing like seeing her face light up as she dances with Belle.

We chose to do these experiences on the same day. This trip was our first trip where we paid for extras. We were so surprised, the kids loved the Pirate League experience so much. Especially becoming real Disney Pirates and fighting some pirates outside the pirate of the Caribbean ride. The most memorable part was when our son fought captain hook at the Pirate and Pal fireworks cruise. When Hook came back for a second round our daughter jumped right in to fight by her brother’s side (at age 3.5). Smee came over putting his 2 fingers together like tisk tisk.

At Jedi Training Camp, kids are trained to become a Jedi and flight either Kylo Ren or Darth Vader.  We had booked an early breakfast, so we entered the park early and was able to sign up for Jedi training camp before the crowds. This is a free activity, but you must sign up and space can fill up fast.  Our daughter was the shortest in her line and got to carry the banner all the way to the stage.

When we arrived at the stage she changed her mind and we thought for sure that was it. I explained it would be too late to change her mind again she joined her brother on stage.  During the stage program, each child is given a chance to go up and fight Darth Vader (or Kylo Ren). After a few kids, it was our daughter’s turn and she fought Dark Vader without hesitation. Then it was our son’s turn and as he walked back to his spot our daughter gave him a big smile and a thumbs up.

This was an awesome character meal experience that sadly is no longer offered at Disney World. It was a Western-themed BBQ that included dancing and a rope show.  At various times during the show Characters would come up and everyone was invited to the dance floor to dance with them. during other parts, the kid would sit around the edge of the dance floor our at their tables.

My husband and I were sitting about one table length down while the kids sat around the edge of the floor. The characters were on stage only doing a dance when we suddenly noticed we didn’t see our daughter sitting on the line. When we looked at the dance floor again there she was dancing with Minnie mouse. Minnie had pulled her up for a special dance.

Our last visit to Epcot our daughter was just not quite tall enough for Mission Space. I hung out with her in the play area while my husband took our son through the fast pass.  We waited what seemed like 20-30min. When they finally finished and came out I asked what took so long? Our son’s response “Mom we went to Space like for real!”.  The following year our son started kindergarten. When asked about where he’s traveled our son told the entire class “I’ve been to Mars”.

9. Curls blowing in the wind.

There is nothing like seeing the smile on your child’s face as you experience a ride together. But there is something about our daughter’s curls blowing in the wind and an ear to ear grin that completely melts my heart. It’s the feeling of being Free or Flying! This is especially the case for Big Thunder Mountain Railroad and 7 Dwarfs Mine train.

I waited until our daughter was 5 to do these experiences as I wanted it to be a special princess day. our daughter hates getting her hair done and the experience honestly wasn’t any different, but she loved getting her makeup and nails done and picking out her dress. She chose Mulan which came with a fan but not a crown. our daughter wanted a crown and the cast members at BBB were so helpful. We had suggested Elsa and Cinderella possibly to go with her dress. The cast member came back with those as well as Elena’s crown which matched perfectly to the Mulan dress.

Our son was on the fence about the knight experience but in the end, he really loved it too. It showed in the photo session they did afterward. They were both very much into posting which is unusual for them and we got some great photos of them individually and together. Cinderella Royal Table brought the full princess experience together but one thing I will never forget that is truly part of the magic of Disney was when we were having difficulty meeting Cinderella.

A Moment with Elaina

We had changed to an earlier time since we finished BBB early and they got us in but Cinderella was taking a break. She was not available after dinner either so we were told to come back when we did she still want there. It was the second time cross by a cast member who was guarding the rope blocking the castle because of fireworks. We told him we would be back again, and he said hold on.

Spoke to another cast member and was able to walk us into Royal Hall to meet not only Cinderella but Elena as well. When our daughter walked up to Elena she immediately noticed and commented on how they have the same crown. I couldn’t believe she noticed and a special moment for our daughter.

Every Trip to Disney is very Magical but there’s always some special moments you will treasure for over. That’s what makes Disney such an amazing place, no 2 visits are ever the same.  We will continue to return to Disney because we continue to make some of the best memories together as a family.

Check out these other Disney posts: Aulani, a Disney Resort and SpaMickey’s Not So Scary Halloween Party7 Shareable Meals at DisneylandHow to turn your Disney World Snack Credits into a MealDCL Royal Princess Tea Party