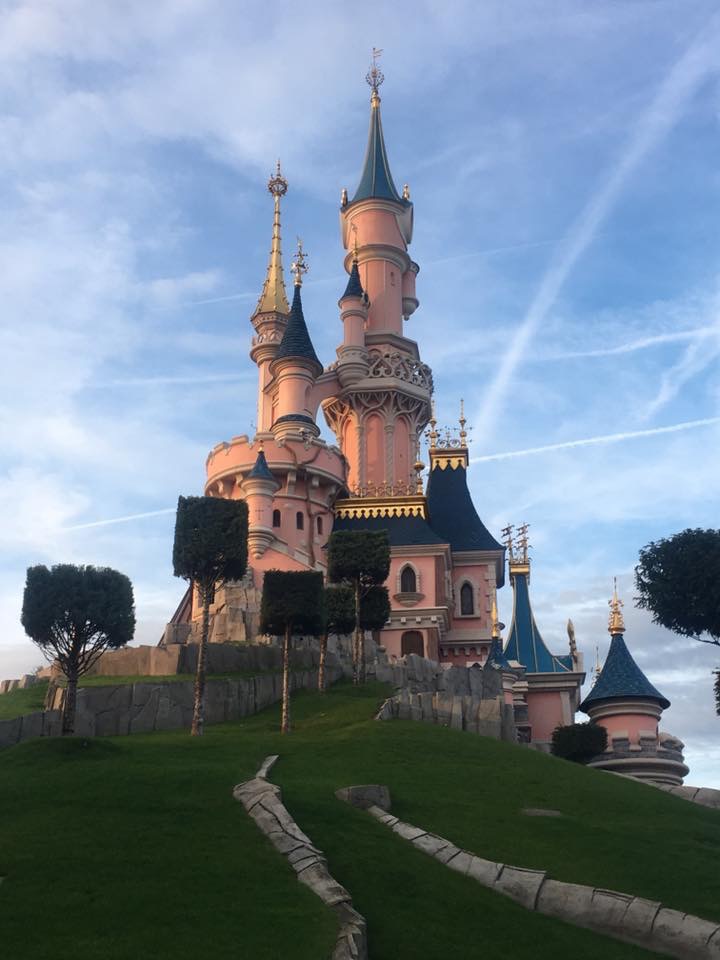 How much is a Disneyland Paris Package?

There’s a lot of things that are different in these 2 packages. You can adjust either package a little lower or higher. For example, you could add a 7th night to the Disneyland package and stay at the Sequoia Lodge. The package price would still be comparable to the package at the Caribbean Beach Resort (a moderate resort).

Why visit Disneyland Paris for the same cost as Disney World

Disneyland Paris has 2 parks: Disneyland and Walt’s Studios. I honestly don’t love the look of the castle but what lives underneath that is exciting. Maleficent, in Dragon form, is chained beneath and you can walk down to see her. Disneyland Paris has the best version of our favorite ride, Big Thunder Mountain Railroad, in which you travel underwater before returning above ground to ride the rails on its own island.

There’s also Adventure Isle which our kids loved exploring. There’s many caves to explore mountains to climb and paths to discover.

There’s the Tree house like every other Disneyland and Magic Kingdom Park offers but with a bit of uniqueness. I would recommend a visit as I find most versions to be better than the one at Disney World.

At Walt’s Studio, Mickey and the Magician is a not to miss show. We watched it twice because we really enjoyed it and It’s mostly in French which none of us understand. Mickey does speak in English and the show is extremely engaging even for the kids.

We also loved the Ratatouille ride and the toy story parachute drop. The kids, especially my son loved the animation academy area where they got to draw cartoon strips.

What we also LOVED about Disneyland Paris is that they still have the Studio Tram Tour and Lights Camera Action show. The kids loved the car show and I am so glad they had a chance to see 2 great attractions that are no longer available at either US parks. There’re so many great attractions at Disneyland Paris we spent 4 Days in the park mostly open till close. One evening we left before closing and watched the fireworks from our balcony (after the kids went to sleep)

With a full week stay there’s enough time to head to Paris to see some of the famous attractions and enjoy so wonderful Parisian Food. My husband and I had been to Paris prior so we really just wanted a chance to show the kids. We booked a hop on and off bus which took us around Paris.

The kids enjoyed the head phones and sitting up top. We got off for lunch, stopping at a grocery store to grab items for a picnic in a park overlooking the Eiffel tower. We enjoyed a playground and also a manually operated carousel where the kids were given sticks to tray and scoop rings that were hung on the outside of the carousel.

We booked a skip the line Eiffel tower tour to the 3rd level. I would not recommend this because while it didn’t take very long t o get up getting down took a very long time as we had to wait in 3 lines to go down 3 elevators (one for each level).

The entire activity took 3 hours and if you ask our kids about Paris they will still say do no go up it. The cost of the tour was $164 for the 4 of us the hop on and off was $63 total and lunch was nominal though I did buy a $40 bottle of Moet and we did buy other wine we had planned to bring back to our hotel but it was confiscated at the Eiffel tower (no glass allowed in through security) so probably $100 spent at the grocery store  and about $400 total including train tickets and misc. expenses for a day in Paris.

Looking back, I may have considered the Sequoia Lodge, which would have lowered the cost a bit and provided more options for breakfast (Ill explain that in a little bit). Some additional Costs to consider with Disneyland Paris it was $163 round trip for 4 of us for the magic shuttle from the airport to the resort. Also our package did not include character meals and only breakfast and 1 other meal per day.

There was an option to upgrade and pay $8 per person more for the breakfast buffet but we hadn’t planned to spend $32 extra for breakfast knowing our kids didn’t eat a lot. It was a bit disappointing we couldn’t simply get a yogurt or a piece of fruit. Before we left I head read people who stayed at other hotels were offered a take away bag and the options varied it could be a pastry and yogurt or fruit and a yogurt, so I was disappointed we weren’t given those options, but we survived on the limited options for breakfast.

We were there for 6 nights. The package included 6 vouchers for table service. The vouchers could be used for quick service if we wanted to at the dollar value listed on the voucher.  Our first night we accidentally brought 4 adult vouchers and no kids vouchers. The server was nice enough to help us find a reasonable solution which was to order a kid’s entrée only for $10 (vs $25 for a 3-course meal). She let the kids share the large bowl of pasta that the 2 could not finish together. We spent around $500 extra on food. Which did not include the princess meals which still puts the cost of the trip within the same range as Walt Disney World. Check out Dining around Disneyland Paris to read my dining reviews and how I stretched our vouchers.

Disneyland Paris for the same cost as Disney World Summary

We really enjoyed Disneyland Paris and experiencing Paris with our kids. Many people dream about an international trip with their family but continue their fun-filled family trip to Walt Disney World. When you compare the cost of a trip like this is comparable to a Walt Disney World Package trip you think.. Why Not?

Learn how you and your family could fly for free to Disney World or Disneyland California here.

You can also join AffordableFamilyTravel.com Crew on Facebook to share tips and tricks for affordable family travel.