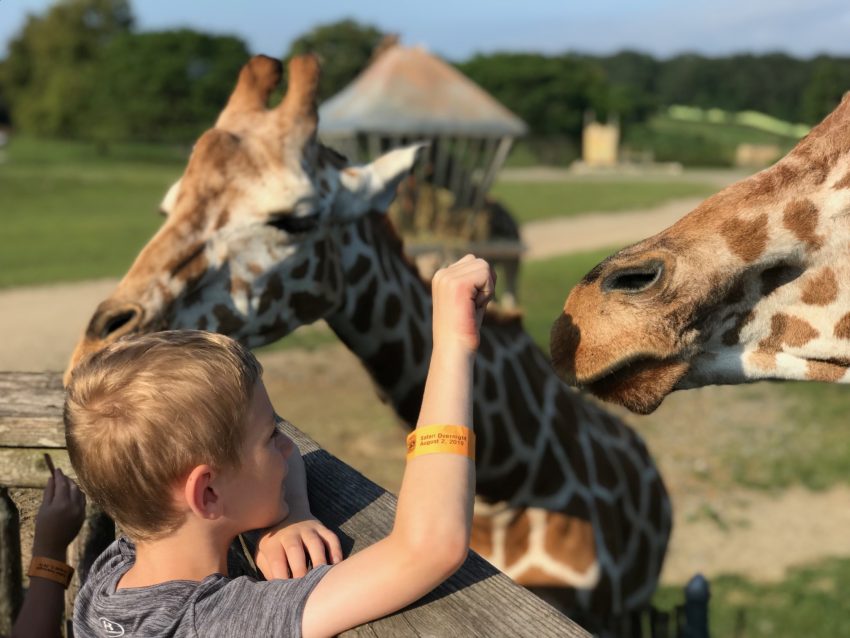 Wonderful Affordable Experience for all Ages.

I don’t want to over sell this Safari Camping experience and have people be disappointed but it’s an exceptional value and a fun educational experience. There was definitely a bit of nostalgia behind the excitement of starting the evening by driving our car through the safari as I did when I was a teenager. Something they haven’t allowed in years since they converted the safari to a ride through safari on large safari trucks similar to the ones at Disney’s Animal Kingdom

The price of the Safari Package is $100 per person or $80 per season pass holder. It includes over night camping (you bring your own tent etc), Dinner, evening snacks, drinks and breakfast plus the entertainment/activities. We are season pass holders and with taxes and fees paid under $400.

Some of the per person Costs alone would be over $100 and you get so much more.

What Else you get :

What’s not so Great about Six Flags Safari Camping?

A few things you should be prepared for. Keep in mind the cost of the excursions I think these are either expected for the price or minor.

They will escort the first group a little before 5:45 pm. You drive your vehicle and follow in a line through the safari itself. Something that was common years ago but not since they transitioned into the ride through vehicle attraction it today.

6:00 – 6:30 pm- Your vehicle will be escorted into our Safari near Camp Aventura to park

They escorted us in earliest but did have a second round that arrived a little while later. I recommend arrive around 5:15 as we did to check in and be in the first group to arrive so you can pick out your tent spot. In the drop off lot, park in a parking space closest to the entrance as that is how they have t he vehicles pull out.

As you follow the line of vehicles heads over to the old Safari entrance and you actually get to drive through parts of the safari as you drive to Camp Aventura. They will give you all the rules about windows up, drive slow. My tip: have your camera read (all the passengers) and snap away. If you put your phone against the window it makes the photos clear and you cant see any reflections on the glass.

We set up by a tree and view of the pasture if we were standing outside-you could see them between the slats of the fence inside the tent too. People set up behind the pavilions (lodge 1 and 2) and those seemed private and u had easy access to the picnic tables.  Those would be good spots too.

Don’t expect much from Dinner.

It’s edible and you can eat as much as you would like. Dinner is hamburgers and hot dogs, liquid cheese sauce lettuce tomatoes raw diced onion and pickles. They had potato salad and toss salad with tomatoes Parmesan cheese and dressing. For dessert packaged brownies and chocolate chip cookies. Bottled soda (coca cola product), water, lemonade and ice tea all covered in ice so nice and cold. Self serve food and drinks.  My husband was bummed they didn’t have potato chips and I admit it would have been a nice in expensive option for those who don’t want potato salad.

They split the large group into 3 smaller groups each groups starts at one animal and rotated to the next.  There was a barn owl, we got to watch up close and hear different facts about, then take turns taking photos with it. They also had a skunk we also got to watch up close but no photo. The last creature was a bearded dragon which you were allowed to pet.

After the animal presentation we headed over to the area where crafts were set up. There were 3 options and adults and children could do all. The crafts were: paining rocks as bumble bees or lady bugs. After you can play tic tax toe with the lady bug and bumble bees. Coloring Monkey fans with markers and Making owls with pine cones.

At 8:45 they offered bingo. We used stickers to make our own bingo board. Then you play. Prize was a peacock feather.

Tip: at first they said size and color mattered then they said it didn’t. So people who had large and small animals would get 2 when an animal was called. It seemed animals were called more than words and letters rarely. (This could change). If you win ask for small feather.  small peacock feathers have the “eye” the really tall ones do not.

They do not sell peacock feathers in the shop- so don’t offer that as a consolation if your child doesn’t win. Thankfully our daughter got over it when she saw a snake (stuffed) in the gift shop she wanted.

We brought 2 folding chairs but they have bails of hey you can sit on. They passed out 18” long popcorn bags to everyone. I recommend bringing folding camp chairs with you in case you want to sit outside but by your tent or for the movie. You have access to your car the entire time so you can always leave them in the car until you need them.

After the movie ended lights out and everyone went to bed. I don’t know if the couple next to us were drunk or just loud people but I got to listen to them for 15 minutes giggling about their mattress size. Thankfully it wasn’t for very long but I can imagine how difficult it could be if there was a loud group as the tents are all right next to each other.

I woke up to the sound of the lions although I didn’t know that’s what it was. I was thinking it was moose or the other large deer like animals in the safari but when I heard it again later that morning I asked and was told its the lions. we were up at 6 am and had plenty of time to slowly pack up and get ready for the day.

There are bathrooms accessible the entire time but no showers. It gets very Dewey in the morning so make sure nothing is touching the walls of the tent and do not leave your shoes outside the tent.

Breakfast was again very basic. Plain, poppy seed, onion and cinnamon raisin bagels. cream cheese jelly and butter and a toaster to toast them. Assorted muffins including chocolate, cinnamon apple, and blue berry. They also had a coffee cumb cake. There was coffee, orange and apple juice, regular and chocolate milk and even soda all on ice. While this was a very basic breakfast I would rather have it be basic and keep the costs affordable then to offer more.

Once they opened Camp Adventura animal area they announced to head over for the giraffe feeding. We had plenty of time to feed them lots of sweet potatoes (they look like carrot sticks), take photos and also visit and learn about the other animals in the area. Make sure you head to the bathroom before heading on to the safari tour.

There were 2 trucks waiting for our group to head out on our safari. The animals were more active in the morning and we enjoyed watching the bears swim. We also stopped for a while and watched the elephants as they left their barn and headed to their area. They were fed hay and we could watch them covering themselves with dirty.

When we return from the safari there is time to look around the gift shop which also has reptiles on display.

10:30 – Your vehicle will be escorted back to the main parking lot

One last Harrah! As you leave Camp Aventura you drive through the safari to exit and head to the theme park parking lot. In the morning the animals are active and feeding. The moose decided they wanted to cross the road in the middle of our caravan. Of course moose always get the right of away.

For those who are not season pass holders, the package includes 1 Day ticket to the amusement park (water park not included). You can choose to enjoy the park the day you arrive or the following day. Tickets are available at guest services.

What They Recommend You Bring

Check out why Six flags season passes are such a great value.

3 thoughts on “Budget Safari Camping with Kids in the USA”