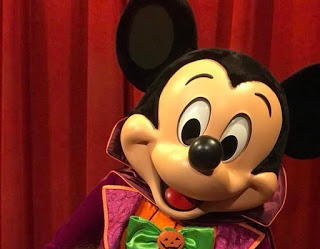 Mickey’s Not So Scary Halloween Party is an affordable way to visit Disney for a Day.

Tips for visiting Mickey’s Not So Scary Halloween Party :

Visiting Walt Disney World during the holiday parties is a great option. You get the magical experience of Magic Kingdom with much fewer crowds and shorter wait times on rides. In September we took a trip to Universal Orlando utilizing southwest companion pass and universal season passes that were expiring in November.  I had been wanting to do a princess trip to Disney World when my daughter was 5 years old and after some consideration, we decided to do 2 Mickey’s Not So Scary Halloween Parties as part of our Orlando trip.

Cost Compared to a 1 Day ticket

We chose 2 Halloween parties which were priced at $75/79 per person per night or $150 per person for the 2 parties. Compared to 1 day at Magic Kingdom which is $110-$120 for one day we felt the parties were a good value. We were able to be at the park from 4 pm till midnight both days for a total of 16 hours in the park, while we would have spent 12 hours with a day pass.

The benefits of the party are that there are much fewer crowds the trade-off is that some attractions aren’t open, but you can try to fit those in during the 4-7 pm regular park hours. You also get the Halloween parade in place of the festival of fantasy parade.

Princess Day The first Party we made reservations for Cinderella’s Royal Table (CRT) and Bibitty Boppity Boutique (BBB). While many will say this is a waste of party time this was the main reason we were heading to Disney.  Both kids did BBB and while my son (6.5) wasn’t quite sure in the end they both loved the experience. For us, somethings are a one-time special experience which CRT and BBB are. It really was special, and we love the photos we have of them. Cinderella’s Royal Table is another one of those onetime experiences. The meal was very good and meeting the princesses magical.

The price of the meal was a tough one to bite and the reason it will be a one-time special experience. We are happy with our past experiences at Akershus as a much lower price (or 1 dining credit).

We had fast passed Enchanted Tales with Belle before our reservation for BBB. Both kids got to participate, and our daughter was chosen for the part of Beast. This means she was able to dance with Belle. She has been selected in the past as well (I think it’s her fierce roar). It’s one of my favorite memories and the perfect start to her princess day.

At BBB my daughter picked Mulan which didn’t come with a crown but she wanted one so we asked if there was one we could purchase. We mentioned Cinderella and Frozen which a cast member brought out along with one she thought would look nice. It was Elana’s crown and it perfectly matched the dress. I was so pleased with the attention the cast members gave.

After BBB we stopped at CRT to see if we could get an earlier reservation. They agreed and we were seated without the initial photo with Cinderella.  When we went to leave we were told to come back. The castle was blocked off because of the fireworks from the show so we let the cast member at the ropes know we would be back.

When we came back 15min later Cinderella still wasn’t available we again told the cast member watching the ropes (I was getting a little annoyed at this point). He asked us to hold on one minute. Went to speak to another cast member and when he returned offered for us to see Cinderella at the fairy-tale hall along with Elena.

When we arrived, we were led in (I believe we were the last ones to visit them as there was no one in the room).  Elena noticed our daughter’s crown right away and mentioned how they both had the same crown.  Our daughter, of course, was so proud and made for a very special moment for her.

Normal park hours don’t end till 7 pm, so you are able to reserve 3 fast passes.

If you have purchased your tickets, assuming you aren’t staying on-site, you can reserve fast passes 30 days in advance. One that I recommend is enchanted tales with Belle one of my favorites (my daughter has been picked to be beast twice and as Beast danced with belle.

Wait times during Mickey’s Not So Scary Halloween Party

Character wait times are a different story. The holiday parties have characters in costumes and also rare characters you can’t often meet in the park. These lines can be very long. On the second day, we decided to go to 1130 to see Moana. The line wasn’t so bad unfortunately we let the kids sit in the stroller and by the time we got to see Moana they had fallen asleep and would not wake up! We got some great sleeping photos.

Mickey’s Not So Scary Halloween Party includes trick or treating stops. Some are at the beginning or end of rides others are stand-alone spots. My kids loved trick or treating. While we didn’t spend $75 for tickets to get $5 worth of candy I can say we didn’t have to wait and more of the time it was through rides or walking through a standalone spot that wasn’t out of the way. We came home with 2-gallon bags of candy!

The Parade at Mickey’s Not So Scary Halloween Party

Parade You won’t see the Festival of Fantasy parade during the party but you will see a fun Halloween-themed parade. The first night we didn’t see the parade so the second night I wanted to sit down early and get a spot. I sat down an hour before the parade and got a great spot. My favorite spot is next to a trash can. This spot had a light post too, so we could use our stroller and the garbage can sort of block ourselves off.

One of the things I dislike the most about Disney is the pushiness of guests at the parades. We have had people stick their kids in front or side of our kids (in front of us) and their kids push or lean on our kids. I have had kids lean on my back or what starts to be comfortable space because very uncomfortable as people squeeze in. so we have learned to find space in corners and wherever we can that helps avoid all this.

Make Your Own Light Saber

While I waited my husband took the kids to make their own lightsabers. We let the kids pick a toy on most trips and this was what they chose. When they got back we had to hem wait in line and get some photos in front of the castle we also got some family photos, so it worked out well reserving a spot early as we don’t usually get castle photos.

We were staying at Universal Studios, so we used Lyft to get a ride to and from the park. Getting dropped off at the Grand Floridian as you go through security at the monorail station at the resort which is much shorter than the parks and it’s a quick monorail in. it’s easier than being dropped at the ticket and transportation center.

We use bubble bum inflatable booster seats. They are great for ubering and approved for 40lbs and 4 yrs old. They roll up and both fit in a backpack and weight very little. On our first day, the monorail broke down. We walked to the boat as suggested and when the first tiny boat was filled. Still in line we saw the monorail running again.

We ran back to the monorail station. As we were on our way to the park, we finally saw a large boat being sent to the Grand Floridian to pick up the rest of the passengers. We were running late and had missed our first fast pass which ended at 4:15. When getting our tickets, we mentioned this to the cast member. She adjusted our fast pass so that it was for any time. That’s the amazing Disney Customer service because cast members are empowered to help regardless of what their position is.

Overview of Mickey’s Not So Scary Halloween Party

We enjoyed holiday parties. Breaking up the days and accomplish everything we wanted during the time allotted. We even had time to do the favorites multiple times. The second party day had longer wait times for mine train and space mountain. I was glad we had ridden them the first time especially the space mountain a couple of times.

We loved heading to Magic Kingdom during the afternoon and evening when it was much cooler. Especially in September and have shorter wait times. We have enjoyed it so much that I have considered doing Disney after dark our next trip. We would love to visit Animal Kingdom and Hollywood Studios. at night with small crowds. Tickets for this are more expensive. I have heard they sell even fewer tickets then the parties and everything is completely walk on.

For these events, you also get to arrive before the park closes but not as early as the holiday party. The great thing is they are offered in the summer and I imagine visiting the parks from 6 pm till midnight. Should be more comfortable than during the hot and humid daytime.

If you are planning a full trip to Walt Disney World, check out 7 shareable meals and How to Turn your Walt Disney World Snack Credits into a Meal.  Check out how you can fly to Orlando for almost free (and many other southwest airline Destinations) click here.

If you haven’t already join Traveling with the Sweeney’s on Facebook.  Check out these other Disney posts: Aulani, a Disney Resort and SpaDCL Alaska Cruise
DCL Mediterranean Cruise
DCL Royal Princess Tea Party