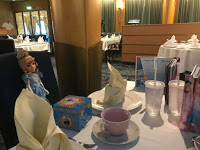 The Royal Princess Tea Party (RPTP) is a special event on DCL that you can prebook in advance. This is a Once in a Lifetime experience that will make your daughter feel like a special princess. She will also leave with many gifts to remind her of this special experience.

I booked the Royal Princess Team Party as a PreK graduation gift for our daughter. It’s not something I would normally spend so much money on but wanted her to have something special especially since she had missed her prek graduation ceremony because of the cruise. The cost of the package was $210 for kids and $79 for adults.

The event starts with each princess being announced by name, crowned, and escorted to their seat.

Presented at each child seating is an 18″ Cinderella doll, an autograph book with a princess pen, a jewelry box, and a charm bracelet with a few charms.

The hosts come out and do a little skit and then the princesses (3) arrive, one by one, and present an additional charm. We had Cinderella, Ariel, and Belle. You have time with each princess for a brief interaction, photos, and of course autographs in their new books. Each child is brought a cupcake themed to their favorite princess (you are given a choice of 3 in advance of the event). At the end of the celebration, there is a chance to have photos with all 3 princesses together. This photo will be included in a keepsake photo binder that was left in our room.

The adults are offered several tea options and the children are brought apple juice. A tiered serving tray is brought to the table with finger sandwiches and dessert. One tray for every 4 people. There is not 4 of each item per tray but it didn’t seem to be an issue. I got excited when I thought a bowl of the white stuff was clotted cream but it was just butter. One family at our table had a food allergy and was brought their own tray.

I would say the tea party is worth the price for a special occasion or a special memory with your princess. The event includes some nice souvenirs and a rare photo of 3 princesses at the same time. You can also get free tickets to a princess meet n greet which had the same 3 princesses plus Tiana.

Check out these other Disney posts:

Aulani, a Disney Resort and Spa

Mickey’s Not So Scary Halloween Party

How to turn your Disney World Snack Credits into a Meal