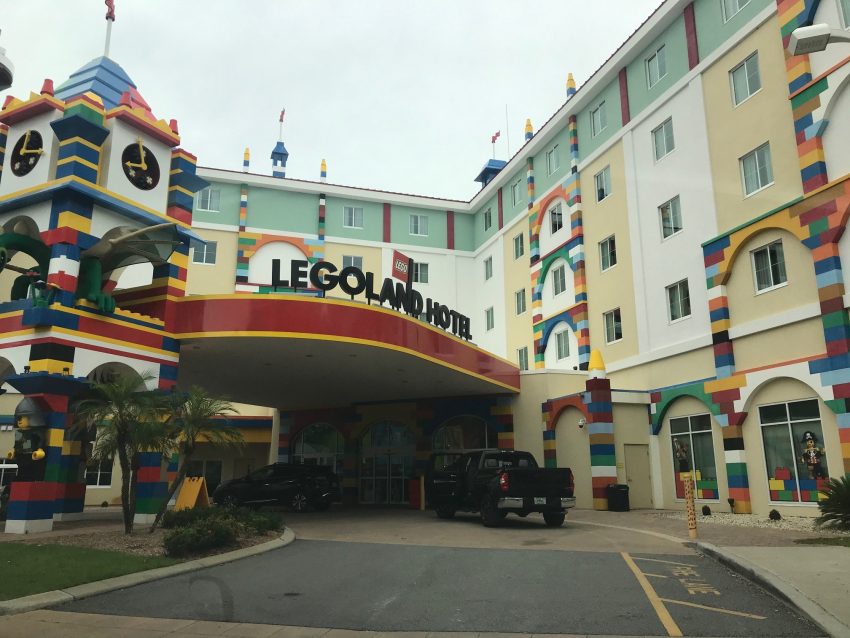 This was our second stay at The Legoland Hotel Florida and visit to Legoland Park. Both trips it was hard to decide if the kids liked the hotel or the park itself more. But regardless both times they left wanting to come back again and yes even after visiting Disney World in the same trip.  You can read all about Legoland Florida Theme Park here.

This trip we stayed 2nts 3 days at the resort in an adventure room at the Legoland Hotel which is adjacent to the park. The previous trips we stayed in a Pirate room and they are similar in how they are laid out and designed , just different in theme. When we checked in they happened to have a 3pm build session available so we signed up and headed right to the build while our luggage was being delivered to the room.

The Builds at Legoland Hotel California

Our first build took about 20 minutes because it was just the 2 kids. Since you are allowed one build per day we were able to do 2 more builds during our trip which took 30-45min depending on how full the class was.

The builds are lead by a Lego Master Builder and each child is given a set of pieces to put together while the Master walks them through the build. There’s even a tv at the front that displays what he’s doing.

Each day is a different object. We built a wolf, eagle and spaceship. You get to take these items home.

The rooms and over all hotel is very well themed. This trip we were in the adventure room which was perfect for our adventurous family. Our previous trip we did the pirate theme and it was the same room layout just different theme. There’s Lego sculptures around the rooms and in the hallways. We very much enjoyed both our themed rooms.

There’s a main bed area with a queen size bed. The bed is raised pretty high and was fairly comfortable. There’s bunk area for the kids which includes a third trundle bed and their own tv. There is no door to this area. The trundle bed was the kids tv snack bed which was nice because my kids always leave crumbs when eating. But it’s also great for families of 5.

When you arrive you are given instructions for a treasure hunt which results in opening the safe. In the safe is a Lego kit for each kid,  juice boxes and a Lego magazine. There were also 2 mini bottles of water by the coffee machine that are complimentary. Only the mini bottles not the enhanced water which has tags with the price on them. Each day they give you a new set for each kid. We got the same set 2 days in a row and check with the front desk. We were allowed to trade it out for a different one. It sounded like they have 4 sets so If you stay 5 nights you will end up with a duplicate regardless. They also replenish the juice boxes and mini bottles of water.

On the Tv they show what looks like security footage of the hotel. It them shows Lego People messing around. Its another cute little touch they add- so as busy as you are turn on the tv at least once to watch it.

One of the highlights for our kids, at the Legoland Hotel Florida is the disco elevator. It plays music and has a disco ball. All the kids and even many adults can’t help but dance. Each floor has a different theme. On the main floor before you enter the elevators, against the wall is a woopie cushion you can step on. Of course this is another kid favorite.

There is a giant castle/boat combo in the lobby of the hotel which the kids can run around and play and the moat is full of Legos to build. Across from reception there is another  pool of Legos to build with. Kids can spend hours (literally) building with the Legos.

Each night they have activities in front of the castle. They seemed to start at 6pm and 7pm and run about 30 minutes and varied day to day but every night ended with a pajama dance party at 8:30 that ran for 45min.

They do a great job getting the kids involved and even the parents at one point (you will do the Macarena or cha cha slide and the YMCA or something similar). The kids had so much fun and were so exhausted that both slept till 8am. Which was ok since the park doesn’t even open till 10am.

The pool is outdoors, right out the back of the hotel. It’s heated so even on cool days you can swim. There’s of course Legos at the pool that float so you can build rafts and boats and try to see if they float.

Breakfast is included with the hotel stay. They have this chart to show how busy to expect it at each time period. Obviously 9-10 am is the busiest as people try to eat right before they head out to the parks. We try to head over between 8-8:30 so we went in our pjs to avoid the crowd.

They had a large selection for breakfast but my favorite was their omelet /fried egg process. When you are seated you are given a sheet and you can order what you want and turn it in so there is no waiting in line at the omelets station. The over easy and over medium eggs were cook correctly (second day the over easy eggs were a little too runny for my liking but not terrible). The omelets were cooked through with our any runny eggs which is the only way Mike will eat them. The second day I asked for sauteed veggies only no egg-I like to eat them with fried eggs and they did it no questions asked although I would have loved a little more spinach.

The buffet in the middle has kids items and had divided trays but the second day they didn’t have them out for some reason. They were great for picky kids who hate to have things touch.

If you all eat well you could easily be full untill dinner with all the options they have.

Our first trip we added the Dinner buffet for $50 for the 4 of us. I wasn’t too impress with it. The option included bbq ribs but all I can remember was I just didn’t enjoy it and felt we could spend $50 on a more enjoyable meal pretty easily. So this trip we did just that.

The first night we ordered Applebees to go because Mikey loves grilled cheese. 2 kids meals 2 adult entrees (steak fajita and a steak) came to around $60. There’s a fridge in the room so our leftovers were stored in there and were eaten the second night while we waited for our new dinner to be delivered.

Our second night we ordered from a local pizzeria. The kids split a spaghetti and meatball meal with potato soup as the side. Mike got a chicken parm meal with side salad and rolls (it came with pasta too) and I had a deluxe steak Stromboli with onions peppers and mushrooms. Total came to $37 including delivery fee. We had leftovers of about half the chicken parm, half the Stromboli and half the salad and rolls. I knew we should have split a meal but we were so hungry after a full day in the park. You can definitely order an entree for 2 , even 2 adults to split.  We packed it in the fridge and ended up taking it to the park for lunch- well my lunch. The kids and Mikey had pbj both days at the parks.

There’s another restaurant called Skyline Lounge that is adjacent to the Castle/Boat play structures. This makes it ideal for having a quick bite or some drinks while the kids play. We personal have not eaten or had a drink there. They changed the layout by adding couches facing the play area so the restaurant feels much more separated than it did before.  I personally liked the old lay out better which provided more seating for those not eating at the restaurant.

The Value of Legoland Hotel Florida

Normally I’m pretty frugal about the cost of hotels. If it’s clean and has a comfortable bed I’m happy. Location is important to us. We rarely are willing to pay to stay at moderate to expensive hotel unless there’s more such as Lounge access with breakfast and evening reception or great activities. With Legoland Hotel Florida, the resort itself is so entertaining that it’s worth it for atleast 1-2 nights.

It’s not a cheap stay but the kids love it so much. The hotel itself is entertainment enough with out even visiting the park. So to have breakfast included, easy access to affordable lunch and dinner options near by and enough entertainment included to keep the kids entertained with out even buying park passes I would say it’s a good value over all for at least one or 2 night to get the experience and decide for yourself it its worth a return visit. It was for us.

I do have a few complaints. They are adding on a huge wing for their new pirate hotel. It seems like this made parking further away (or maybe it always was) parking is a pretty long walk. So much so that Mike opted to pay $25 for our full stay (not per night) for valet.

The other thing was that Mikey couldn’t buy the creation he built. At the park they have a pick a brick store with a scale and they charge by weight. I think the hotel should have a scale and you can buy your creation by weight.

Over all the hotel is a wonderful place for toddlers and school age kids. I definitely recommend a trip. It has helped reignite the kids love of Legos again. Now we can’t wait till Legoland NY opens up summer 2020!

For Information on Legoland Themepark Florida, check out my Review.